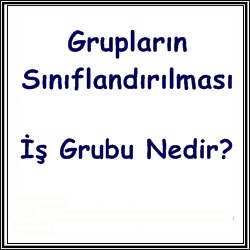 Classification of Groupscan be realized in various ways. A very common classification is the distinction between formal and informal groups in organizations.

Formal groups, such as departments in companies, are created to achieve organizational goals. The structure of the groups does not change with the resignation of some employees or the replacement of some of them. Work is important in formal groups. In other words, the group has no say in the selection of members.

Not all human relations existing in organizations can be explained by the formal group. In addition, informal volunteer groups are also seen to develop. These relations are not directly related to accomplishing the task, but rather friendship, solidarity. fulfills needs such as a sense of identity and self-respect.
Informal groups in the organization can develop in various directions. What is Group and Organization? We have already sought an answer to the question.

Some informal groups may be the same as the formal working group, while others may form horizontal and diagonal cliques.

These groups serve as a key communication function in organizations, up, down and sideways. If informal communication and practices are of a nature to ensure organizational effectiveness, they can be considered natural. However, if they endanger the effective functioning and security of the organization, it should be investigated why these groups develop disruptive practices. Sometimes the establishment of informal groups and relationships may be due to the inconvenience of the formal order and the difficulty of working according to the formal rules. Groups are also classified as small and large or primary and secondary.

Secondary groups, on the other hand, are rather impersonal, formal, operational, and dominated by role relations.

Normally, small primary groups develop within the boundaries of large secondary groups. However, first groups are also formed by bringing together members of different large groups, such as department secretaries who hold meetings.

It is also seen that the groups are classified as ingroups-outgroups-membership groups-admired groups.

What is a Business Group?

Although groups are classified and studied in various ways by social scientists, it is the work groups that will be discussed here in terms of expediency. Because business groups

Business groups are formal groups formed through the appointment of members. For example, Accounting Manager, Human Resources Manager… The nature of the work done and the technology used are important factors that determine the relations between the individuals of the work group and that group with other groups. On the other hand, the management skills of the person called the group supervisor, that is, the supervisor, also play a vital role in group relations. People who work under the supervision of the manager, who can blend positional conditions and managerial skills harmoniously by knowing their group well, can satisfy their needs such as social support, self-confidence, love and respect within the group. In this case, the boundaries of the initial formal group and the emotional group formed over time merge by overlapping. A team spirit and commitment prevail in such a group.

Commitment can be defined as “the strength of mutually positive attitudes among members of a group”. The more the group’s values ​​are shared, the greater the commitment. In groups with a high level of commitment, members engage in common behaviors in the face of events. The group reacts as if it were a whole.
While «firmly connected» groups are beneficial for organizations, the direction in which group collaboration is headed is important. If common attitudes and behaviors are oriented towards organizational goals, this is a positive and functional cooperation for the organization. On the other hand, the cooperation of a group that has not adopted the goals of the organization can be dangerous and destructive for the organization.

When it comes to this point, it will be useful to re-examine and think about concepts such as “management”, “manager”, “leader”.