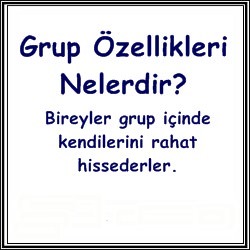 The term group refers to a group of usually 2 to 20 people, the number of which is sufficient to enable and not hinder face-to-face relationships and interaction. (Engaging groups work best if the number of group members is less than 10). When the number of groups reaches 12, the group is usually divided into smaller units.

What are Group Characteristics? In the group “naturalness” dominates. Individuals feel comfortable in a “natural” role within the group, because the group is a community founded on a rational and freely chosen basis for the achievement of certain goals. of individuals Administration In groups formed by the appointment of a person, for example, in business groups, naturalness emerges over time, as the “group” spirit is formed.

Individuals feel comfortable in a “natural” role, that is, within the group.

As a result of being together and interacting constantly, group members begin to recognize and understand each other’s thought system and emotional structure. As a result, the ability to look at things from the perspective of others and put oneself in the shoes of others develops and commitment increases. Groups put a certain amount of pressure on their members to conform to standards. Such oppressive behavior acts as a controller and binds individuals to group norms. The force of pressure is in not accepting or removing a member from the group.

“Social distance” between individuals in a group is minimal. People who work in a large community can be “distant” or “formal” in their relationships. However, the situation is different for small groups formed within the group. Group members have to interact with each other.