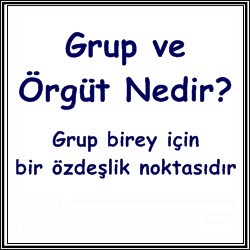 The group is the focal point of modern society. His family lived in his apartment Administration an individual who is a member of various groups such as the board, the neighborhood team he plays football, the service he works in, and the like; He can only satisfy his social needs such as belonging, self-respect, and mutual success through group relations. The group is a point of identity for the individual, the bridge between him and the society.

Group dynamism and group behavior AdministrationIt is a matter of close concern. Because a large part of the work is accomplished with work groups and these groups can affect the behavior of the individual positively or negatively in terms of the organization. The individual’s attitude towards the goals of the organization, the leader, the task, and other relationships is largely determined by the group to which he belongs.

What is a Group?

It is a formation consisting of people who come together to realize a purpose, who are conscious of group identity and boundaries, who are in interaction and solidarity, and who have some common values.

You may be interested in: 9 Steps to Making a Good First Impression

What is the purpose of grouping

Groups can have a variety of goals. Groups can be formed for reasons such as accomplishing a job, sharing common interests, providing certain benefits to its members, providing assistance to any part of the society, communicating. The important thing is that the purpose is common and adopted by all group members.

On the other hand, not every group of people who have come together to achieve a goal is a group. Even if they come together for a common purpose, if there is no “we” thought in people, they are not considered a group, but a collection of individuals.

The people forming the group should be aware of each other’s existence and be aware of the fact that they form a group. A community watching a conference or passengers traveling on an airplane are not considered groups. Because they do not realize that they are a group that has psychologically identified themselves with the group.

What is Group and Organization? In fact, the existence of the idea of ​​”us” is not enough to make communities a group. For example, in a large department individuals “We …. Although it has the awareness of “We are the Directorate”, it may not have the characteristics of a group. There is interaction and solidarity in groups as well as the idea of ​​”us”.

The basic element of interaction is face-to-face relations, namely conversation and listening. However, interaction occurs through writing, reading, or even just with facial expressions or gestures, in short, any mode of communication that conveys a meaning. For example, an employee may cough to indicate to others that a famous person has come to their workplace. It is interaction that creates group dynamism. Without interaction, the group turns into a mass of people unaware of each other and motionless.

A person realizes the psychological need to prove his personality by finding recognition, membership, status, social security and support within the group. In return for these rewards, the group member often sacrifices some of his or her wishes to maintain group unity and membership; for example, when a member of the group is sick, another member works overtime to fill his place. In this way, cooperation and solidarity are born.

Interaction increases as the group works on a common task. The increase and continuity of interaction gradually begin to develop common attitudes and values. This common value system first appears in relation to the basic activities of the group.

The philosophy of “this is how we work here” is formed. The classification of printing presses in a service, the way letters are written, customer relations, and the attitude towards other employees are determined by this common understanding. Later, shared values ​​extend not only to determine group members’ basic activities and perspectives on work, but also to influence their personal tastes, their lives outside of work and even their life relationships.